The Graduate Management Admission Council (GMAC) today released the findings of its 2015 Year-End Poll of Employers, which reveal solid 2015 hiring numbers and robust 2016 hiring projections that reflect a continued healthy demand for recent graduates of master-level business programs, especially those with an MBA.

Among the survey’s other findings: Ninety-six percent of responding employers agree that hiring business school graduates creates value for their companies and 68 percent agree that recruiting graduates of MBA and business master’s programs is a priority in their company’s hiring plans.

“Recent graduates from business and management programs should see high demand for their skills because employers understand that they are valuable assets to their organizations.” 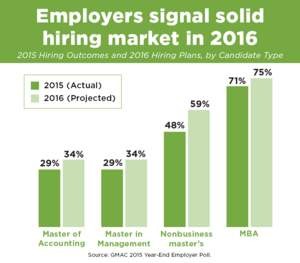 Findings in this report represent survey responses from 179 recruiters from across 159 companies of varying sizes and industry sectors located in 31 countries or regions worldwide.

A majority of the employers participating in this year’s survey indicate that they will be striving towards improving performance and productivity, expanding their customer base, and launching new products and services and less focused on overcoming economic challenges and cutting costs than in recent years.

A greater share of employers intend to hire graduates of Master of Accounting and Master in Management programs in 2016 than did so last year.

These positive developments echo what recent business school graduates say about the value of their degrees.

In a September 2015 GMAC poll of recent graduates, a vast majority of alumni from the class of 2015 said their graduate management degree helped prepare them for the job market.

In fact, three to four months after graduation, full-time two-year MBA alumni in the class of 2015 reported an employment rate of 91 percent — five percentage points greater than the class of 2014 reported in September 2014.