The UBSS MBA is designed specifically for busy executives seeking the knowledge, credentials and contacts to take their career to the next level. The program was first established in 2014 and is provided by the highly-ranked Universal Business School Sydney (UBSS) in the heart of the CBD.

The three-year program comprises 16 subjects delivered in seven-week blocks including four weeks of online study followed by a three-day intensive workshop delivered at the five-star Primus Hotel in the Sydney CBD.

UBSS is an independent higher education provider based in the Sydney CBD. It was accredited by TEQSA in 2008 and has traditionally focussed on Bachelor of Business, Bachelor of Accounting and MBA programs. The UBSS MBA was accredited in 2014 and currently has more than 800 students enrolled.

The UBSS MBA, in executive delivery mode, has been developed as an extension of the highly-successful UBSS MBA program and is accredited by the Certified Practising Accountant (CPA) Australia, the Institute of Public Accountants (IPA) and Chartered Accountants Australia and New Zealand.

UBSS MBA subjects are delivered one per study period with four weeks of online study, followed by a three-day intensive workshop held from Friday to Sunday. Final assessment is due within two weeks of the block workshop. 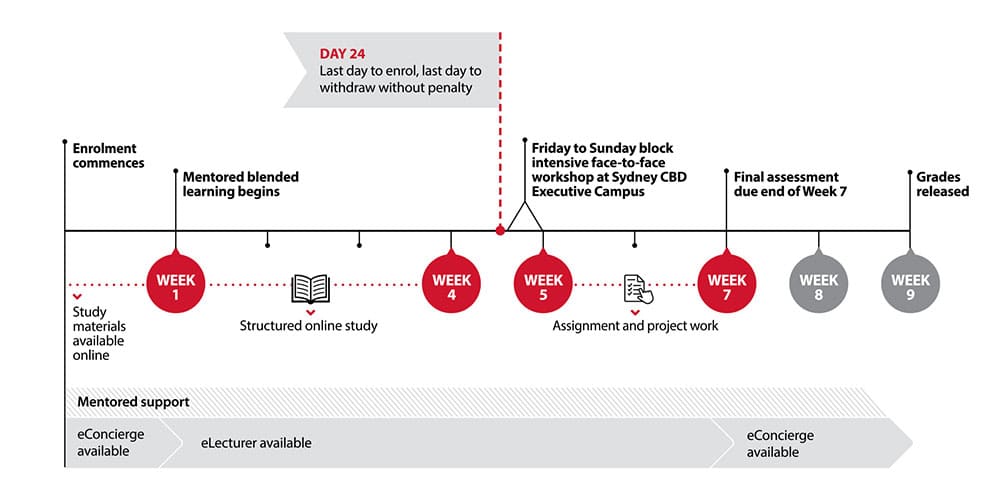 The intensive workshops are a key component of each subject and are held in the five-star, art deco surrounds of the glamorous Primus Hotel in the Sydney CBD.

The workshops were built around the concept of a ‘third place’ that enriches each student’s overall learning experience, away from home and work. Historically, the Third Place is at the heart of any thriving society and is characterised by a place of community togetherness distinctively away from home and work, where people can come together to network, form connections and nurture relationships. Since 2016, UBSS has participated in the Australian Government’s Quality Indicators for Learning and Teaching (QILT) survey with outstanding results.

QILT results provide prospective students with relevant and transparent information about Australian higher education institutions from the perspective of recent students and graduates. The survey and results are managed by the Australian Government Department of Education and Training.

In the most recent survey UBSS outperformed leading public and independent Australian universities.