I wonder, if doing an MBA was a prescription medicine, what the potential side-effects would be listed as. I don’t necessarily accept the MBA “Marriage Breakdown Ahead” analogy… although I do think this triangle has some merit. Personally, I’ve pretty much had to buy an entire new wardrobe due to upsizing, and my rowing boat is collecting cobwebs. In my head, it whines like a neglected puppy every time I don’t go out and train.

But that’s not the point. This isn’t a whinge blog about how hard an MBA is, and how it should come with a warning label that says “kiss your social life goodbye for two or so years” (or in my case, my waistline). Ain’t nobody got time for that.

This is about the unexpected benefits of doing an MBA at the University of Western Australia. This morning the Guardian printed an article on the “top five ways to increase your brain power” yarn. What can I say? I’m gullible and of course went and read the article. It’s here, for those who are interested.

Point number two is “learn a new dance, or language, or musical instrument.” Apparently, learning something new engages a part of the brain called the Nucleus Basalis (so says the article) which is responsible for helping us pay attention and to consolidate new connections in the brain when we learn.

Since beginning my MBA journey at the UWA Business School (sorry for the Idol-speak there), I have had some weird, weird side effects.

The first is I began to draw. Not just a little bit, but prolifically. Daily. Hourly. In any medium I could get my hands on. It started with the good old ball-point on notepad in the margins of my Data and Decision Making class (aren’t we all glad to see the back of that one!). Then moved to PowerPoint, Publisher, pencil, charcoal, watercolour, acrylics, graphite. Post-it notes. Canvases. Portraits, comics, puppies, Jedi knights (there’s a whole series of them). Animations of fire-breathing goats.

I drew a bit as a kid and loved art class, but not like this. This is a whole new beastie. I am not saying I’m particularly good, but it’s enjoyable. It’s almost compulsive. Scratch that, it is compulsive, it’s my go-to procrastination method.

I have concluded that prior to now, my Nucleus Basialis was largely concerned with regurgitating Simpsons quotes and pickling itself in red wine. The rest of my brain has welcomed it back into the fold and let it stretch out.

The downside, of course, is my partner (known universally as “the Swede”) is bemused by this and the entire front room of our house turning into an art studio.

What was supposed to be my study desk looks like this: 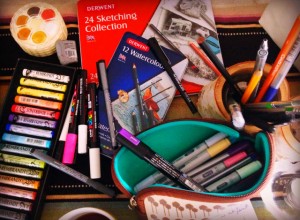 The other side effect of an MBA is a huge improvement in my ability to concentrate.

As a journalist and then media adviser, assignments rarely last more than a day. It’s not unusual to jump from one subject to something completely different in a 20-minute period, all the while interrupted by the never-ending stream of news feeds, twitter pings, talk-back shock jocks, Facebook posts, press conferences, phone calls, faxes (apparently they still exist – who knew?) and hallway cricket.

I know I’m not the only one whose job is a cacophony of useless distractions scrabbling for our attention.

I tried to return to piano practice prior to starting my MBA and for the first few months, I could barely muster 15 minutes of playing before I compulsively checked email, cleaned something or gave up.

Not any more. When the prospect of economics study is my only other guilt-free alternative past-time, suddenly I can play for an hour. Or more. I’m not on speaking terms with Chopin at the moment but Beethoven and I are getting along famously. I can even master C# minor, my least favourite scale as a kid. (Honestly, other than the Smashing Pumpkins Mellon Collie and the Infinite Sadness, is C# minor not just the most ridiculous key?).

I hope this doesn’t sound like a brag blog. That would be terribly embarrassing. The point is, I didn’t realise how critical further study was to maintaining and building brain power.

What if I’d not done an MBA? Would I have been able to do these things? I don’t think I would.

Regardless of what I learn in class… null hypothesis equations, for example… undertaking my MBA at UWA has been worth the effort, if only for unlocking parts of my mind that I thought had been killed off by 30 years of abuse and neglect. 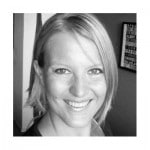 About Peta
I am a full time media professional, part time student and passionate Whovian (Ed: Dr Who Fan). My turn-offs are cucumber, kale and writing in the third person. My turn-ons are correctly used semi-colons, black coffee and my yellow Saab convertible. I chose to undertake an MBA because it seemed like an easy thing to apply for on a random Tuesday of procrastination in 2013, and to my great surprise I was accepted. I chose the University of Western Australia because the best thing about going to uni, is actually going to uni. This is a decision I have not regretted, except for a dark five minutes or so in the midst of studying for a statistics exam.