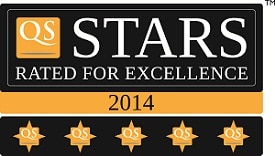 Bond University has been awarded a rating of Five Stars by QS Stars, which rates universities worldwide (on a scale of 1-5+) across a number of key criteria. QS Stars is internationally recognised as one of a few truly global rating systems.

In addition to an overall rating of 5 Stars, Bond also received 5 star ratings for the following categories:

Bond’s Accounting & Finance discipline, which featured in the world’s elite (Top 200) institution rankings for the first time in this year’s QS World University Rankings by Subject, received a 4 Star rating.

Bond Vice-Chancellor and President, Professor Tim Brailsford said the ratings were a significant achievement for the University, and testament to Bond’s unique business model.

“Bond’s rating is consistent with our standing as an international university, recognised around the globe,” Professor Brailsford said.

“Our results can be largely attributed to our commitment to small-group learning and personal mentoring, international diversity, cutting-edge facilities, quality teaching faculty and continual innovation in the development of new programs.”

As Bond prepares to celebrate its 25th anniversary in May, Professor Brailsford noted “Bond has come a long way in just 25 years. Our 5-star rating places Bond alongside universities that have hundreds of years of history. So while many of our peers may have had a significant headstart, we are closing the gap very quickly.”

QS Stars is a rating system produced by the QS Intelligence Unit. The results have been published alongside the QS World University Rankings® since 2011 to provide a range of stakeholders, in particular prospective students, with a more in-depth analysis and the opportunity to dig deeper into an individual university’s strengths and weaknesses. The QS Stars team conduct a thorough and comprehensive audit of participating universities to produce these ratings annually.