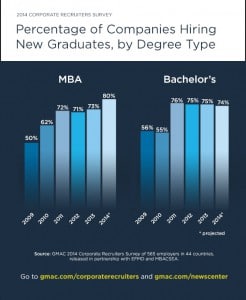 More companies plan to hire MBAs and other business school graduates in 2014, according to a global survey of employers out today.

Some 80 percent of business school recruiters plan to hire MBAs in 2014, up seven percentage points from last year and 30 percentage points higher than 2009, in the heart of the economic crisis, when just half of employers hired MBAs.

The 13th annual Corporate Recruiters Survey of 565 employers from 44 countries was conducted in February and March by the Graduate Management Admission Council, which administers the GMAT exam on behalf of business and management programs worldwide. The survey, including 32 of the top 100 companies in the FT 500 and 36 of the Fortune 100, was conducted in partnership with EFMD and the MBA Career Services and Employer Alliance.

“More companies in all sectors and across the world plan to hire business school graduates, with projected hiring rates the highest for all degree types since the Great Recession started in 2009,” said Sangeet Chowfla, GMAC CEO and president. “MBAs have always been valued by employers, but this survey shows that as the economy improves, employers see MBAs as a good investment into their future.”

The optimistic hiring outlook for MBAs and other master’s-level business graduates comes as fewer companies are focused on overcoming economic challenges. Companies focused on growth and expansion are more likely to have improved hiring plans.

“This year’s survey paints a very positive picture for the business education sector and clearly shows how companies and recruiters value the whole portfolio of business degrees. Despite all of the doom and gloom, the clear message from the market is that business schools are providing the talented, bright individuals that companies need,” said Prof. Eric Cornuel, CEO & director general of EFMD.

“With the global economy moving forward at more solid pace in 2014, MBA CSEA is pleased to see that 80 percent of companies intend to recruit MBAs this year, that salary gains are being realized for MBAs in regions such as Asia-Pacific, and that industries such as consulting have been increasing recruitment since last year. These are all positive signs for MBA graduates and talent in the pipeline,” said Mark Peterson, president of the MBA Career Services & Employer Alliance and director of graduate business career services, Iowa State College of Business.

For the 2014 Corporate Recruiters Survey report, go to gmac.com/corporaterecruiters.