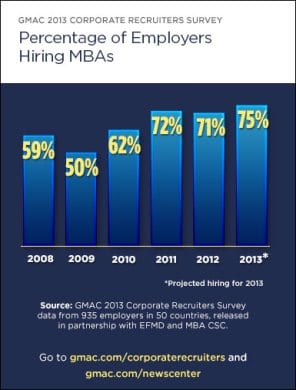 The job market continues to improve for graduate business school degree holders, with more employers planning to hire MBAs this year than they did last year.

The Graduate Management Admission Council’s (GMAC)  has released its 2013 Corporate Recruiters Survey of 935 employers around the world found 75 percent plan to hire MBAs this year, up from 71 percent that hired MBAs in 2012.

Employers in the Asia-Pacific region (including Australia) are also bullish on MBA graduates with 61% planning to hire MBA graduates this year, compared to 54% last year.

A companion student exit survey, the 2013 Global Management Education Graduate Survey, shows that similar to last year, six in 10 business school graduates already had job offers in February or March. The annual employer and graduate surveys, looking at the current employment outlook from both sides of the market, were released today by the Graduate Management Admission Council.

“Whether employers are aiming for more productivity or growth, the world’s graduate business schools are providing the talent for them. B-school graduates are finding that their education is providing a clear and valued competitive edge in the job market,” said Dave Wilson, president and CEO of GMAC, the worldwide association of business schools that administers the GMAT exam.

Other key findings of the Corporate Recruiters Survey were:

“Companies are looking to attract the best and the brightest, and the business school experience provides an exceptional opportunity to gain new knowledge, learn and share with a diverse group of students and faculty and most importantly develop at a personal level in many different ways,” said Eric Cornuel, director general and CEO of the European Foundation for Management Development.

The 2013 Global Management Education Graduate Survey of 5,331 graduating students attending 159 universities in 33 countries found that 60 percent of those seeking jobs had at least one offer in February or March, comparable to the 62 percent of class of 2012. Likelihood of landing a job offer varied substantially by many factors, including graduates’ preferred work location and whether they studied in their home country or not.

Both surveys show a healthier job market for business school graduates from five years ago, when just 50 percent of corporate recruiters planned to hire MBAs and 43 percent of class of 2009 graduates surveyed had early job offers.

The 2013 GMAC Global Management Education Graduate Survey and the Corporate Recruiters Survey are available at gmac.com/surveys.