There are an estimated 19,000 MBA programs currently being taught around the world. The vast majority, more than 90%, are effectively delivering the same type of learning. They are taking the same approach, drawing on the same resources, and teaching the same cases. There is some variability, but the model has rarely been disrupted over the last century.

This convergence and dominance of the case-based approach provokes one simple question, ‘Is the traditional MBA adequately preparing students for the challenges of the next century?’ The case-based approach is useful, but it focuses on identifying patterns in past problems to aid in response to future challenges. But what if the challenges of the future bear no resemblance to the problems of the past? How can we teach students to respond to a changing world, when we don’t do it ourselves?

When we sat down in 2015 to review our MBA program at the Australian National University (ANU) it was important that we remained true to the principles that have established ANU as one of the most respected research universities in Australia and the world.

We quickly realised that if we wanted to be real change agents and provide students with a degree that allowed them to reach their full potential and contribute effectively in a changing world we needed a different approach. Following extensive consultation with industry and peak bodies in Australia and overseas, and discussions with current and future students, we realised that we needed to disrupt the way we teach our future leaders.

This ultimately resulted in a decision to embed an evidence-based management approach in everything we do.

A brief history of the evidence-based approach

The current principles of the evidence-based approach to management have their origins in the medical profession in the 1990s.

It began with ways of trying to address the inconsistency and the variability associated with going to see a medical practitioner. Effectively the quality of treatment you received came down to the quality of the individual practitioner, the quality and currency of their original training, and whether they had been keeping up-to-date with the latest evidence. When you are dealing with people’s health, this variability can be the difference between life and death.

The medical profession wanted to change this by developing a series of methodologies, and an approach to education that would ensure that medical practitioners had an understanding of what good evidence looked like and that they had access to the tools to interpret and apply the best available evidence to provide better treatment, and to ensure patients enjoyed the best possible outcomes given their particular medical condition.

Wind the clock forward 10 years and the world was in the depths of the Global Financial Crisis and many people began to question the role management education, particularly MBAs, played in the crisis. It made sense to apply the evidence-based approach adopted by the medical profession to the profession of management, particularly if we appreciate that the actions of our graduates have a direct impact on the livelihoods of employees, shareholders, and society more broadly.

The evidence-based approach to management

The starting point for evidence-based management is that management decisions should be based on a combination of critical thinking and the best available evidence. And by ‘evidence’, we mean information, facts or data supporting (or contradicting) a claim, assumption or hypothesis. Evidence may come from scientific research, but internal business information and even professional experience can count as ‘evidence’. In principle, then, all managers base their decisions on ‘evidence’.​

Many managers, however, do not adequately scrutinise the quality of the evidence they rely on to make decisions. As a result management decisions are often based on ‘intuition’ or so-called ‘best practice’ observed from watching the actions of competitors with little regard for the particular circumstances that may have contributed to any observed success. Evidence-based practice seeks to address this situation by helping managers to critically evaluate the validity, generalisability and applicability of the evidence they have in hand, and guide them to find the ‘best available’ evidence to support a specific decision in a particular context at a given point in time.

From the classroom to the world

When it came to developing the structure and content of our new MBA we didn’t just want to ‘teach’ evidence-based management in a single course, but rather, we wanted to embed the evidence-based approach in every course and program within the school. It was about building an evidence-based culture among students and faculty.

This required the development of a completely new approach to business education. To guide this work, we developed a new set of pedagogies that wrap around the content that students may see in a traditional MBA program. However, our approach encourages students to challenge and understand the assumptions that sit beneath this content. We force students to become critical and analytical thinkers that strive for the best possible outcomes given the constraints associated with the evidence available to guide their decisions.

As our students progress, they are given the ability to identify the appropriate evidence, to effectively problematise a particular challenge, evaluate and analyse the available data, apply the resulting knowledge to guide better decisions, and then assess the quality and impact of their actions. Our approach also incorporates a maturity dimension that extends these capabilities as students move through the MBA, and enables them to self-assess their own evidence-based competencies, and where necessary, to develop strategies to improve.

At the end of the MBA we want our students to have a comprehensive understanding of contemporary management theory, but we also want them to have a unique set of evidence-based skills that will ensure they are prepared for whatever the future may bring. Importantly, they will be prepared for managing in a real-world setting – they’ll be able to respond to problems that are fuzzy and complex and messy, just like in the world outside of academia. 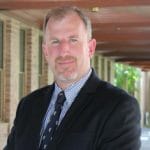 During his career Professor Keating, the sole academic member of the Australian Government’s Service Leaders Group, has focused on bridging the gap between industry, government and academe and his expertise is regularly sought by industry and government.