MBA graduates continue to be in high demand in the employment market with 92 percent of 2012 graduates surveyed by the Graduate Management Admission Council (GMAC) were employed three months after graduation.

That’s six percentage points higher than class of 2011 graduates surveyed at the same time the year before in GMAC’s Alumni Perspectives Survey. 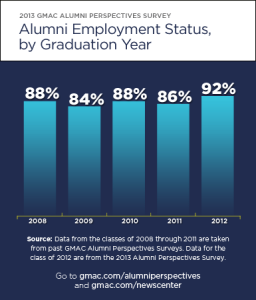 In addition, some 77 percent of the class of 2012 graduates surveyed said their starting salary met or exceeded their expectations, and 76 percent said they could not have gotten their job without their graduate management education.

The 13th annual survey of 4,444 MBA and other graduate-level alumni was conducted by GMAC, which administers the GMAT entrance exam for graduate business and management programs worldwide.

“As the economy improves in many parts of the world, employers who are hiring look for skilled managers to lead the way,” says Dave Wilson, GMAC president and CEO.

A variety of factors affect compensation, such as pre-degree salary and experience, industry and job function, and median salaries of the class of 2012 showed significant differences by program type.

Median starting salaries of 2012 graduates varied most widely by work location (shown in US dollars):