The Financial Review Boss MBA ranking has been published biennially since 2007. All Australian business schools are invited to participate and are provided an overview of the methodology and invited to give feedback.

The University of Sydney has trumped all comers in the 2019 AFR BOSS MBA Rankings, taking top spot for both its flagship MBA and Executive MBA programs.

The University of Sydney Business School’s $63,000 MBA ranked best with alumni for Overall Satisfaction and Value for Money. The ranking s are determined using a range of factors based on surveys from the schools and alumni.

The University of Queensland fell from second to eight and Melbourne Business School dropped out of the list all together.

Of the Australian schools, Macquarie MBAs were the best paid with an average salary of $US120,091 ($AUD177,000) three years after graduation, an increase of 83% on their pre-MBA salary.

Three Australian business school made their way onto The Economist’s list of the world’s best MBA providers.

Out of 100 schools around the world Melbourne Business School, the University of Queensland Business School  and the Macquarie Graduate School of Management all ranked in the top 50 at 23rd, 79th and 49th place respectively.

The same three schools also made The Economist’s top 100 MBA ranking in 2017, with the most notable change coming from Melbourne Business School, which jumped four places to 27th.

AGSM @ UNSW Business School’s two-year, full-time MBA program has cemented itself as among the best in the world, securing eighth spot on the latest bi-ennial Forbes MBA rankings.

For the first time, AGSM@UNSW Business School’s two-year MBA has been ranked among the top 10 worldwide by Forbes. It comes a week after AGSM @ UNSW’s Executive MBA secured third place in the AFR BOSS MBA rankings.

The AGSM program was the only Australian MBA program to feature in the Forbes ranking. The top 10 include London Business School (UK) HEC Paris (France), IESE (Spain), CEIBS (China) and Esade (Spain). 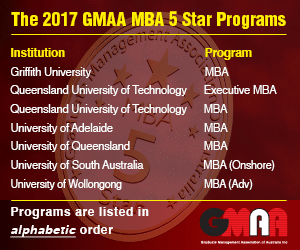 Wollongong makes its debut on the 5-star list while Deakin University and Latrobe lose their 5-star ranking.

The GMAA rankings provide the country’s best business schools with a means of quantifying the success and calibre of their postgraduate programs, which helps not only the institution in terms of allowing it to set benchmarks and aspirations for itself, but potential students seeking to maximise their learning outcomes.

One of the aims of the assessment is to assist prospective student in their choice of institution / program by looking at programs from two perspectives – attractiveness and educational quality.

Kush Pursues The QUT MBA Over His CA And Joined Toyota...

Rankings Are Important (But Not Always Equal)