Melbourne Business School has completed its merger with the University of Melbourne’s Faculty of Business and Economics, creating one of the region’s largest business schools.

MBS was established as part of the University of Melbourne in 1954 and awarded its first MBA, and the first MBA in Australia, in 1965. The School separated from the University in the late 1980s but there have been a number of attempts to engineer a formal collaboration over the last few years.

Under the alliance, which was originally announced in October last year, the business community retains a majority ownership of MBS Ltd (55%), with 45% owned by the University.

University Vice-Chancellor Professor Glyn Davis, who was appointed to the MBS Limited Board last week, said the agreement was a return to MBS’s origins.

“Melbourne Business School was once the sole provider of graduate education in business and economics at the University, and now it is once more,” Professor Davis said.

“MBS has gone from a very small, influential and powerful school to a much larger school that now has not just a world-class MBA but a Master of Finance, Master of Management and much more.”

Professor Paul Kofman will continue as Dean of the Faculty of Business and Economics (FBE). 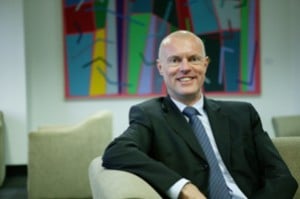 Professor Zeger Degraeve (pictured) will continue as Dean of Melbourne Business School, and will also become Dean of the Faculty of Business and Economics.

“Graduate business education today demands a global mindset and with the creation of one unified graduate school for business and economics at Melbourne our resources are aligned to face the globally competitive challenges Australia faces in this marketplace,” he said.

Professor Kofman said the deal unlocks the true potential in both organisations while ushering in an exciting future for business and economics education.

“An exciting future that offers true excellence at every level of a business and economics education from undergraduate and graduate to post-experience and executive education has been heralded through this collaboration,” Professor Kofman said.

“For someone thinking of graduate business and economics education in Australia there is now simply only one destination for excellence.”