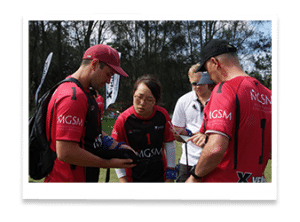 Macquarie Graduate School of Management (MGSM) MBA students are being given the opportunity to participate in one of the country’s most exciting leadership courses, including a two-day XVenture Challenge.

The world-first elective unit, titled Leadership & Teams in Action – XVenture, will be offered from Term 2 and has been created by leadershup expert Mike Conway.

It includes a set of introductory mini-lectures and a two-day, experience-based XVenture Challenge to complete the module. The entire Challenge is filmed and post-produced on site, and the video is used for learning during and after the program., Australia’s top business school.

The introduction of the course concides with the appoinemtn of XVenture founder Mike Conway being appointed as an Adjunct Professor at MGSM.

XVenture specialises in creative and innovative solutions for business, leadership, team and experientially based learning programs. It has created the television series XVenture Corporate Challenge, the XV141 digital business channel, and the extraordinary 100 Leaders program which is presented through Event cinemas.

MGSM has been working with XVenture since its executive, senior staff and students tested a two-day, hands-on XVenture Challenge last year.

Professor Alex Frino, Dean of MGSM, said: “After undertaking the XVenture Challenge it was obvious that this has to be a key part of future learning. The aim is to take students out of the classroom and into the field to test out traditional management ideas.

“XVenture’s approach is unique, with a blend of challenges reflecting contemporary business as well as an understanding of reflective learning practice – something which is often lacking in MBA studies. This program delivers important management theory in an online program before taking students into the field in a radical new experiential learning experience.

“XVenture has tremendous dedication, commitment and standards in this field. The work they have undertaken with major corporations and the research they continuously gather on how teams and leaders succeed is very powerful.”

The future-proof MBA module consists of 12 mini-lectures and recorded lectures delivered by MGSM’s top academic team, including Prof Frino, and produced jointly by XVenture and MGSM.