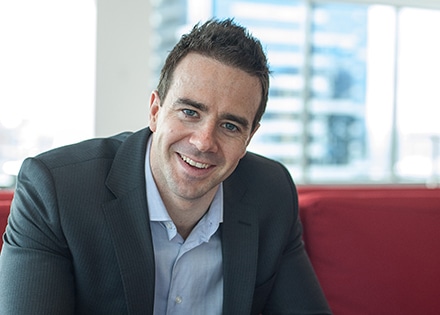 Michael Jenkins’ MBA journey started with the challenge of finding a course that still allowed him to put his career first and finished with a prestigious award from Deakin University.

“For me, my work and my clients are always my number one priority, and studying at Deakin afforded me the necessary flexibility to uphold that,” he says. “Most MBA students these days need to fit study around work, not the other way around.”

All evidence would suggest he got the balance just right.

When deciding where to undertake his MBA, Michael found some universities failed to understand the order of priorities that he had set for himself.

“I went to a couple of other information nights and they said the opposite. They wanted you to be at uni two nights a week at 6pm and had an expectation that students would fit in work around study. I thought that was completely out of touch with the modern workplace.”

Michael completed six units on campus, seven off campus and one residential – an intensive study period where students live-in.

Because his role at PwC allowed him to forecast his work and consequent time commitments months ahead, he could use Deakin’s flexible delivery options to advantage by mixing up the modes of delivery.

“I would know if I was going to be working intensely in the office, travelling interstate or overseas so I could make the call on whether I studied on campus or off,” he said.

Strategy, Finance and Change Management were the standout subjects for Michael, mainly because of the quality of the lecturers who took them, he says.

“Information on a page or website is easy to find these days, it’s ubiquitous. It was the lecturers that differentiated the learning experience, they delivered on the promise of learning something beyond mere data or information in a textbook. They were really good.”

Michael found the residential unit particularly beneficial and says, in hindsight, he would have enrolled in another.

“The residential unit was very useful from the point of view of quickly forming relationships with colleagues,” he says.

“It’s a very intense environment with a number of people who are complete strangers on day one and close friends by the end of it.’ The real benefit of a residential lies in the people rather than the subject matter, he explains. ‘It is more about personal development – about emotional intelligence and social intelligence, rather than content. It draws on people from all parts of Australia, generally with a greater level of experience, with whom you form relationships very quickly.’

At the commencement of his course, Michael was a Manager at PwC and is now a Senior Manager delivering broader and deeper services to his clients. He says his current role does not explicitly require the MBA but he expects it to enhance his future opportunities and quality of service delivery to clients, both at PwC and possibly beyond it.

‘These days I think it’s about what you do with it – applying the obtained knowledge and then doing something meaningful with it, rather than pointing at a few initials on a page,” he said.

Having six years in the workforce before taking on the MBA was a huge advantage to him, he says, and he recommends others also bring some experience to the course.