A combined team from the University of Arizona and Queensland University of Technology led the world in solutions for a sustainable future, taking first prize at the fourth Global Business Challenge graduate business case competition.

This year, the GBC challenge for competing universities was to identify novel solutions that lowered the cost and reduced the risks associated with the transition from fossil-fuel based energy to achieve sustainability and reliability from renewable energy sources.

Teams were encouraged to identify potential technology collaborators from a variety of sources. These may include their own institution, other research organisations, industry including start-ups.

The University of Arizona and QUT found victory with their innovation called ‘Smart Blox’ – a complete Do-It-Yourself solar system product that is similar in accessibility and mobility to a portable petrol generator, but can produce a continuous level of residential power to run appliances through a standard power outlet.

Competing in Brisbane, the team went up against 98 teams from 38 universities across 14 countries, winning $100,000 plus industry prizes from ACTewAGL and the Queensland Government, each worth $75,000.

The team’s prize money will go on to aid Smart Blox to become a successful start-up by supporting two pilot projects in the Australian Capital Territory and Queensland. 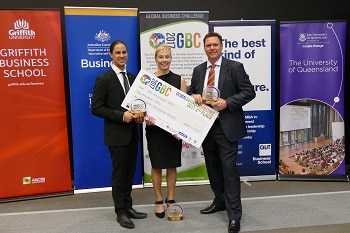 Behind the winners were seven finalist from around the world, including Griffith University which took second place.

Griffith earned their spot through their LRES (Long-term Renewable Energy Storage) concept, which was designed for making the move from fossil fuels to renewable energy.

The underlying technology presented a viable long-term solution due to its ability to be stored up to months at a time without self-discharging like lithium ion batteries.

MBA Director Associate Professor Chris Fleming congratulated the team on their competition result, saying that he is “incredibly proud” of their achievement.

“The team’s final product was of an exceptionally high standard and I thank the students for representing the Griffith MBA in the 2017 GBC.”

The competition ran across to rounds. Round one was a virtual round comprising a virtual pitch and the submission of a five page Executive Summary of the proposed “Concept Solution”. The second and final round comprised an intensive weeklong competition in Brisbane involving a 48 hour lock-in phase where teams needed to develop a business case for a hypothetical application for their proposed solution.