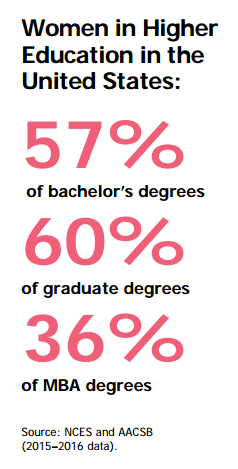 What do women want when it comes to business education? It is a question that the Graduate Management Admission Council (GMAC) sought to answer with their new white paper, What Women Want: A Blueprint for Change in Business Education.

GMAC’s white paper revealed that globally, women represent a greater share of the applicant pool than men in many of the business master’s programs, such as marketing, accounting and management, but women are still underrepresented in MBA classrooms in the United States and around the world.

The paper identified the drivers of this continued lack of gender parity in MBA programs, and explored the biggest challenges women face in the business school application process and the differences between men and women in their motivations to pursue graduate business degrees.

“Women have made phenomenal progress in attaining business master’s degrees, yet they have not yet caught up with men in the share of MBAs earned,” GMAC CEO Sangeet Chowfla said.

“Our extensive global segmentation research and market intelligence looked at several important underlying factors that contribute to this growing participation of women in business master’s and lack of parity in MBAs, with financial concerns being the number one issue cited by female applicants.”

In order to learn more about what women want in business study, around 5,900 individuals from 15 different countries were surveyed as part of a Global Graduate Management Education Candidate Segmentation Study.

Motivations and Approaches to the Application Journey Differ by World Regions

Women in Western countries differ in their motivations and approaches to the application journey from women in emerging economies like China and India, and the motivational profiles of Western women differ noticeably from their male counterparts. In India and China, women’s motivations and application behaviors more closely resemble those of male applicants from these countries.

Funding Is a Significant Barrier

Globally, 29 percent of female survey respondents cited financial issues as the key reason they had not yet accepted their admissions offer to graduate business school. Seeking scholarships and financial aid were top of mind. Men, on the other hand (33 percent), cited that they were waiting for an offer from additional schools as their reason for delaying acceptance.

The greatest gender difference on this issue was seen in the U.S. More than a third (38 percent) of female survey respondents cited financial reasons as their number one reason for not yet accepting their admissions offer compared with 20 percent of male respondents. Yet, obtaining funds to pay for schools is a bigger challenge for men than for women in both India (8 percent Indian women vs. 14 percent Indian men) and China (9 percent Chinese women vs. 11 percent Chinese men).

Women are already achieving parity (52 percent) in master’s programs such as Master of Marketing, Master of Accounting, and Master in Management, and the number of these programs has grown exponentially in recent years. The share of women in MBA classrooms, however, has consistently remained well below parity with men at 37 percent. Despite greater shares of women choosing non-MBA master’s programs over MBA programs, the data show that women hold the MBA degree in higher regard than men, and view the degree as a passport to wider career advancement.

“It’s easy to make the mistake of thinking of women as a monolithic block and to view their lack of parity in MBA classrooms as a failure on the part of business schools,” Mr Chowfla said.

“The insights in this white paper clearly reveal that women are distinct from men in what they are seeking from their business education experience, and their behaviors differ between countries and behavior types.

“In our opinion, business schools have made great strides in inclusivity and shaping their recruiting and admissions processes to ensure a diverse classroom,” he said.

“We hope that equipped with this paper’s data and insights, business schools can develop even bolder strategies for increasing the number of women in their classrooms and achieve the gender parity seen in other sectors of graduate education.”