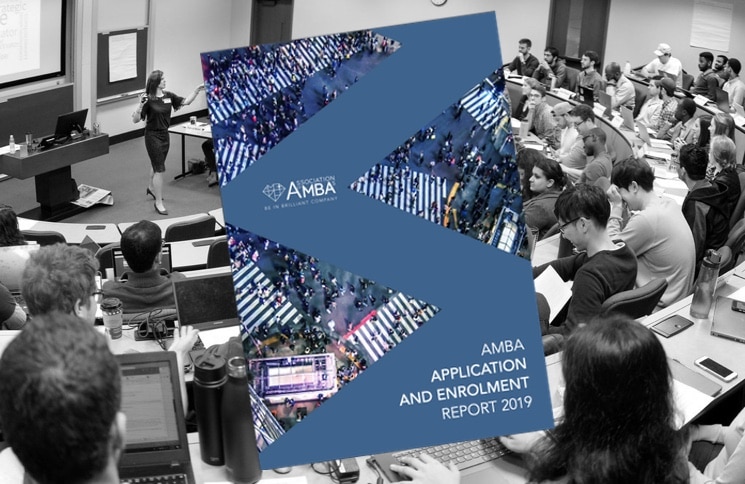 Demand for MBA programmes has grown internationally at Business Schools accredited by the Association of MBAs (AMBA), with applications increasing by 9% between 2017 and 2018, new research reveals.

AMBA’s annual Application and Enrolment research, which measured the application, enrolment, diversity and graduation figures for the 2018 calendar year at 236 Business Schools (232 of which offered MBA programmes) and compared the figures for 202 identical accredited Business Schools between 2017 and 2018.

The study found that School enrolment figures in the sample of Business Schools had increased by 10% year on year, and the proportion of women being enrolled onto MBA programmes had increased by one percentage point to 37%, across the world.

Association of MBAs CEO Andrew Main Wilson said the report provides insight at a time of great uncertainty in the global economy and the geopolitical landscape.

“The results from this study demonstrate the continued excellence of AMBA-accredited Business Schools and their ability to expand their programmes in this ever-more demanding world,” he said.

AMBA Research and Insight Manager Will Dawes said the report showed that AMBA-accredited Schools have experienced substantial levels of growth in their MBA cohorts.

“Much of this strong performance was driven by increased demand for MBA programmes in China (including Hong Kong, China), but there was also growth in MBA cohorts in Schools across several other regions, including Europe,” he said.

“It is also encouraging to observe that the recent growth in the share of applications and enrolments among women has continued. This demonstrates that AMBA-accredited Schools are continuing to focus on more diverse and gender-balanced cohorts.”

The largest increase in applications was in China (including Hong Kong, China), where applications rose on average by 29% for each Business School and by 16% at a programme level.

The average number of enrolments at AMBA-accredited Business Schools followed a similar growth trajectory to average applications (+10% per Schools and +9% per programme).

The global conversion rate of applications to enrolments was 37%. According to where the programme was taught, the highest conversion rates were in Latin America (54%) and in Oceania (52%), while the lowest were in India and the UK (27%).

In 2018, 39% of those applying to and 38% of those enrolling onto programmes were women. Although this represents a gender imbalance, the proportion of women applying to and enrolling onto AMBA-accredited programmes has increased by approximately six percentage points in the past five years. Meanwhile, the global application to enrolment conversion rate was marginally higher for men than women (40% vs 38%).

In total, 36,537 individuals graduated from AMBA-accredited MBA programmes in 2018 compared to 35,002 in 2017. On average, at each School there were 157 MBA graduations per School and 42 per programme. Europe comprised the largest share of graduations (29%).

More than four in five programmes (84%) were conducted through classroom-based learning. A smaller proportion of programmes were delivered in a blended setting between classroom and online (12%) or exclusively online (4%).